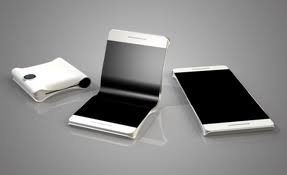 Your phone will be as flexible and think as apiece of paper. In 2003, Morph was a product Nokia released as future of mobile phones with flexibility screens. Around three years later, the company manifested interest in its flexible screen with the launch of Kenetic prototype.

In 2013, the popular smartphone manufacturer Samsung released their first phone with a phone with OLED display known as YOUM. Years of research went into it; they finally make a prototype of an OLED screen made of plastic, replacing the screen made of glass for making it more flexible.

In October the same year, LG rolled out its prototype called the LG G flex, which is about to be released this year. But according to the website of LG, the phone will have limited flexibility. You can bend it to 180 degrees.

Actually, OLED is made of hydrogen and carbon. Upon application of an electrical current, it produces light. It is around 200 times thinner than your hair as well as transparent. Moreover, the components of the OLED screen consist of light emitting layers, electrodes, and substrate.

Lately, researchers are doing research to find an alternative material for replacing ITO, the conventional electrode utilized in OLED technology. Graphane was discovered in year 2004.